Although we have news of the occupation of Larraga in prehistoric stages, at the moment no archaeological deposit of this period has been excavated. 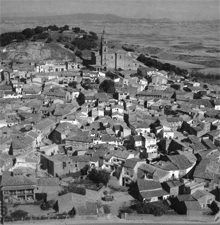 As far as we know, the oldest remains belong to the Neolithic stage and to its continuation in the Chalcolithic.

These are concreted in a possible megalithic construction and in several loose finds of lithic tools corresponding to small settlements in the open air, such as those of La Sarda, Gandaraiz or Las Cabras.

Within the Protohistory there are two stages, the Bronze Age and the Iron Age. Of the deposits that we preserve of these periods we would emphasize the one of Castellón (Cebror), located in a fluvial terrace next to the river Arga. With the Old Age there was the arrival of the Romans and the process of acculturation and mestizaje of the indigenous population. A good example of this moment can be seen in the Roman votive altar that was discovered in 1987 in the old town along with several columns and currently shown in the Archaeological Museum of Las Eretas (Berbinzana). Precisely, this discovery, together with several more that have been hidden or others that today are found without excavating in the surroundings, lead us to think about the possibility of locating on the very old town the federated city of Tarraga, named by Ptolemy and Pliny the Elder.

Although it would be in a very deteriorated state by the continuous transit for centuries. This possibility was already raised by Nicolás De Miguel in the III General Congress of History of Navarre (1994) and then has been reaffirmed by Amparo Castiella in his work “On the Roman roads of Navarre” (2003). Recently, Igor Cacho exposed in the VII Congress of History an archaeological site of Larraga with a regional importance (2010).

After the fall of the Roman empire of the west in 476 d.C. Came the barbarian invasions. In 711 the Muslims conquered the Visigoth kingdom of Hispania and the Christians took refuge in the north, creating in our territory the Kingdom of Navarre. OLYMPUS DIGITAL CAMERA The first documentary reference of Larraga dates from 1052, on the occasion of the donation of the king García to Santa Maria de Nájera of the monastery of Berbinzana, inscribed in the term of Larraga. Between 1153 and 1158 Larraga was incorporated into the Castilian dowry of Queen Urraca. This caused that it was razed in 1156 by Sancho the Wise, causing a great desolation in the zone.

To recover the settlement, this same king granted to Larraga in 1193 new fueros. These, along with those of Artajona (1193), Mendigorría (1194) and Miranda de Arga (1208) would later be compiled in the Fuero de la Novenera, one of the seven local charter families of Navarre prior to the promulgation of the General Law 1238). In general terms, the Fuero de la Novenera is a regional legal text that stands out because of its archaic and humanitarian nature, exempts the payment of the novena and unifies the annual amount of payment. The seat of the court was in the church of San Esteban de Larraga, where the oath was taken and the ordeals were carried out, as the researcher Fortun Pérez de Ciriza relates. By this time, at the end of the XII century beginning of XIII, the Holy Christ of Socorro was carved and later appeared like one of the first councils of Navarre that could have the jurisdiction of its own castle. This can be seen in a letter of honor of 1276, which also contains the medieval wax seal of Larraga: a castle of three towers on a bridge of five arches.

In 1366, Larraga had 189 fires and was among the ten most populated councils of Navarre. In 1379-1389 and 1476-1479 Larraga was again part of a Castilian protectorate. In 1396 an event of great transcendence took place for the municipal organization since that year the union of Larraga and Berbinzana was formalized. From then on, the mayor of Larraga became the maximum authority of both councils and the day of San Esteban appointed to a lieutenant mayor in Berbinzana. In the middle of the fifteenth century the civil war between graveyards and beaumonteses began and during the war, in 1468, the kings granted Count de Lerín the civil and criminal jurisdiction of the town. A few years later, in 1479, it was confirmed perpetually along with the low and medium. However, in 1507 they were taken away and erected to Larraga in Buena Villa, in privileges in which they were granted the seat and vote in the Cortes de Navarra, commercial freedom, the coat of arms or the privilege of fair among others rights. Previously, it had been besieged by Caesar Borgia, son of Pope Alexander VI, failing in its attempt.

After the conquest of the Kingdom of Navarre (1512) and incorporation to Castile, the possessions of the Count of Lerín confiscated in 1507 were restored and certain prerogatives of the Royal Privileges of 1507 were rendered ineffective. With this, Count de Lerín – Of Alba-recovered the rights it had over the town until 1837, the year in which the jurisdictional lordships were definitively abolished. A circumstance that allowed Larraga to preserve its castle, being saved of the numerous demolitions that affected to great part of the Navarrese castles. A few years later, in 1527, the town council brought a lawsuit to the count in the High Court, trying to question their rights. The sentence of 1547 determined that the lord had no right over Berbinzana but over Larraga. Something that indirectly caused the separation of both peoples in 1558-1560.

In 1571 began the architectural extension of the church of San Miguel Arcángel with a work that is considered one of the most outstanding of the Navarrese renaissance. By then, the town of Larraga was divided into several sparks or neighborhoods: San Esteban, San Miguel, Santiago, San Andrés, Santa María. Of century XVII it would be possible to emphasize the ascent of the family Rodríguez de Arellano (Mayorazgo), with seat in Cortes de Navarra by the arm of the nobility. In the century XVIII the Plaza de los Fueros was built, the tower of the church of San Miguel and lived Diego Gómez, one of the most important organists of Navarre who built instruments such as our locality. The Contemporary Age came to Larraga with the War of Independence (1808-1813). With the Carlist wars (1833-1840, 1872-1876), Larraga began one of its most dense and important historical stages to be a liberal bastion of enormous importance that passed the most important generals of the time (Fernandez de Cordoba, Espartero , Martínez Campos, Concha, Primo de Rivera, Echagüe, Moriones, etc.). In this way, the castle was fortified again along with other complementary buildings, although at the beginning of the twentieth century it would eventually disappear. A defensive wall or wall was built throughout the perimeter of the town and from two to five February 1875, King Alfonso XII visited Larraga discontinuously. However, as Larraga had a great importance on the liberal side, he also had it in the Carlist, since from here came several of the most influential people of the moment: General Garcia, Fray Ignacio de Larraga, General Mendiry, Colonel García or the vice president of the Manuel Larraya Provincial Council (Restoration). In addition, in November 1834, the infant and suitor Carlos María Isidro de Borbón visited Larraga along with Zumalacárregui and Iturralde, at the head of seven battalions and six squadrons of cavalry. Shortly after, in 1835, Zumalacárregui suffered a defeat in the bridge of Larraga.

In 1904 the nuns of San Vicente de Paul took charge of the old Hospital of Larraga, running it until 1995 together with the teaching. In 1918, the first water was brought to the town center and the Town Hall distributed from 1,500 to 2,000 stolen communal land before the peasant demand. Previously, electricity and light had arrived. At the moment, one of the issues that conditioned political and social life was the demarcation of the communal, especially during the Second Republic. Shortly afterwards the house-barracks of the Civil Guard of Larraga moved to Artajona when building a new barracks there. After the tragic civil war of 1936, with a high number of victims in the rear, Larraga gradually recovered, and in this way the creation of several cooperative farming societies continued. Industrialization took place in the sixties, and this, together with the agricultural technification, led many workers to move to the factories of the Middle Zone and Pamplona in the 1970s and 1980s. Although this would not prevent the notorious development of vine nurseries that would later make Larraga one of the largest producers at the national level.

In 1977, Spain went on to democracy and in 1986 joined the European Union. This last step was translated into Larraga in the twinning with Peyrilhac (France) in 1991. The last years could be characterized by the extension of the urban helmet and by the adaptation to the new basic services: construction of the sports center, public school, health center , Purification, renewal of networks, land consolidation.

– Archaeological site of the Naveo: https://dialnet.unirioja.es/servlet/articulo?codigo=3832182

– Union of Larraga and Berbinzana: https://dialnet.unirioja.es/servlet/articulo?codigo=4542044