House palace located in the street Sor Julia Ruiz, very close to the Plaza de los Fueros. It is a building of the seventeenth century with two great shields of the same century, in which we can see, among others, the arms of the Rodriguez de Arellano. At the historical level, it should be noted that King Alfonso XII slept in this palace when he visited Larraga in 1875. In the courtyard of the same palace house, surrounding the block, we can see the remains of the old defense of Larraga built in the first war Carlista (19th century).

Baroque square located in the center of the town, which consists of two angled porticoed sides, which make up half of a typical main square. It was designed by Juan de Larrea and has been recently restored (1987). The main building is the seat of the Town Hall and is presided over by a shield of the town carved in 1742 by Juan José Vélaz. In the lateral building there are several houses. In the same square we can see the old Hospital de Larraga, with a gallery of half-point brick arches, and the pediment, which is attached to it. 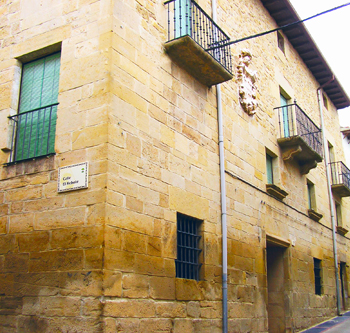 House-palace located in the street Brotherhood, going down the Carnicería Square. It is a baroque house-palace, arranged in 1825 as you can see in the lintel of the portal, and has an alabaster shield of the Esparza between two of the balconies. It is located at the intersection of the streets of San Andrés and Santiago. It is a palace-house of the XVIII century that has been recently restored and that formerly comprised the whole block. In its facade we can see two shields of the Esparza, descendants of Yturgoyen, as we can read in a stone inscribed under one of them.

It is the main monument of Larraga and it is only open during the hours of worship. Architecturally, the set consists of several artistic styles. The oldest, Romanesque-Gothic, are located at the entrance of the temple and reach the columns of the interior. This primitive temple was extended during the sixteenth and seventeenth centuries with a new cruiser and a new headboard, highlighting two huge columns in the first and the horns and the quarter sphere that cover the main chapel in the second. Being one of the three fully classicist constructions of the moment, this extension is considered one of the best architectural works of the Navarrese Renaissance. This characteristic was motivated by the intervention of Juan de Villarreal, one of the precursors of the rebirth in Navarre. Later, in century XVIII was erected the baroque tower in the outside following the model of the one of Santo Domingo de la Calzada, and in century XIX a neoclassic sacristy was constructed in the interior.

As for the furniture, first of all we could mention the body of Diego Gomez, with a baroque keyboard and a romantic one of which stands out the register of the horn of the right hand. It has a monumental façade-altarpiece and figures as one of the best in Navarre. The main altarpiece is a baroque work that is declared of Cultural Interest (BIC). Its owner is San Miguel and the author is the architect Fermin de Larrainzar. Another one of the outstanding altarpieces is the one of the Virgin of the Rosary (BIC), baroque. It is located to the left of the main altarpiece and stands out for its rich decoration of foliage and flowers, very fine and carefully executed, as well as the titular virgin, from the beginning of the 16th century. The Santo Cristo del Socorro is at the entrance of the temple and is one of the few crucified remains of Navarrese Romanesque (XII-XIII centuries). He has a great devotion in Larraga and for that reason he is copatrón of the same, being his party the 3 of May. It is declared BIC, as well as the baptismal font, which was worked as the Renaissance enlargement (16th century) was executed. At the top of the hill on which the town sits, there was until a few decades ago an important castle of which scarcely remains today. However, surrounding this mountain there is a walk with pine trees from which you will be able to observe some very beautiful panoramas of the middle zone and the beautiful meanders of the river Arga.